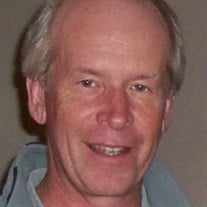 Dan Diedrich, age 61 of Mattoon, IL passed away Thursday March 14, 2019 at his residence. A funeral service will be held at 1:00 P.M., Monday, March 25, 2019 at Mitchell-Jerdan Funeral Home, 1200 Wabash Avenue, Mattoon, IL. Burial will immediately follow at Resthaven Cemetery. A visitation will be held from 11:00 A.M. until the time of service. Dan was born in Berwyn, IL to Richard and Doris (Tyle) Diedrich. He is survived by his father, Dick Diedrich of Mattoon, IL; one sister, Nanci (Bruce) Johnson of Chandler, AZ; one brother, Doug (Bridget) Diedrich of Mattoon, IL; one nephew, Evan Diedrich and one niece Kristen Diedrich of Mattoon, IL. Dan graduated from Mattoon High School and the University of Illinois Champaign-Urbana with a B.A. in Landscape Architecture. He moved to Southern California where he practiced commercial landscape architecture for over twenty-seven years working with many famous architects on such projects as the new J. Paul Getty Museum, Crystal Cathedral expansion, Disney's California Adventure, the LAX airport, and the campuses of USC and UCLA. He also had many projects in Fresno, CA. He began as an apprentice and worked his way to full partner. Dan was an avid golfer, scoring his first hole -in-one at Oak Creek Golf Club in Irvine, CA. Upon retirement, Dan returned to live in Mattoon and became a member of the Mattoon Golf & Country Club where he made his second hole-in-one in hole number six. He was on a number of recreational baseball teams and bowling leagues and was an excellent cook and gardener. In his childhood he enjoyed playing ice hockey and Babe Ruth baseball. Dan was a talented artist and also designed and built his own furniture. He was an avid fan of the Chicago White Sox, Blackhawks, Green Bay Packers, and of course, the Fighting Illini. Memorials in his honor are to be made to the Douglas-Hart Nature Center, 2204 Dewitt Avenue East, Mattoon, IL 61938 or the American Heart Association, 2141 W. White Oaks Drive # A, Springfield, IL 62704. Please visit www.mitchell-jerdan.com or www.facebook.com/mitchelljerdanfuneralhome to share a memory with the family or light a virtual candle in his honor.

The family of Dan Diedrich created this Life Tributes page to make it easy to share your memories.

Send flowers to the Diedrich family.