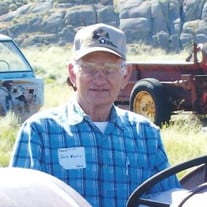 Dale Franklin Annis, age 86 of Mattoon, IL, passed away at 9:10 P.M., Saturday, January 27, 2018 at Heartland Christian Village in Neoga, IL. The funeral service in his honor will begin at 12:00 P.M., Friday, February 2, 2018, at Mitchell-Jerdan Funeral Home, 1200 Wabash Avenue, Mattoon, IL 61938, with Pastor Dan Haifley officiating. Burial will immediately follow at Dodge Grove Cemetery. The visitation will be held at the funeral home from 10:00 A.M. until the time of service. Born February 10, 1931, in Mattoon, IL, Dale was the son of the late Frank and Leona (Carlyle) Annis. He married Jessie Armantrout in Mattoon, IL, on December 30, 1950; she passed away December 19, 2016. Dale is survived by his son, Chris Annis and wife Teresa of Mattoon, IL; three grandchildren, Aaron Young of Fort Worth, TX, Josh Annis of Arthur, IL, and Jenna Annis of Tallahassee, FL; one brother, Lawrence Annis and wife Shirley of Mattoon, IL; two sisters, Donna Brewster and husband James of Decatur, IL, and Rose Shirley and husband William of Toledo, IL. Dale is preceded in death by his wife, parents, one daughter, Dale Ann Young, one brother, Robert Annis, and one sister, Maxine Reinhart. After serving his country in the Korean War, Dale came home and began his career farming. He was truly a steward of the soil and endeavored to leave the land he controlled in a better condition than when he acquired it. Dale was very aware of soil erosion and used conservation farming practices to minimize its loss. He was a past outstanding conservation farmer of the year. Dale was quite a fabricator and engineer. He and his brother, Lawrence, built a set of pull behind scrapers which were used to build terraces to control soil erosion on the farm. Dale was a member and former deacon of Maranatha Baptist Church in Mattoon, IL. His desire was to live a life that was pleasing to his Lord, and always be ready to give an answer for the hope that abided within him. He was the best father anyone could ever ask for and he will be greatly missed. Memorials in his honor may be made to Lincolnland Hospice of Sarah Bush Lincoln, 1004 Health Center Drive, Mattoon, IL 61938. Please visit www.mitchell-jerdan.com or www.facebook.com/mitchelljerdanfuneralhome to light a virtual candle in his honor or share a memory with the family.

The family of Dale Franklin Annis created this Life Tributes page to make it easy to share your memories.

Send flowers to the Annis family.