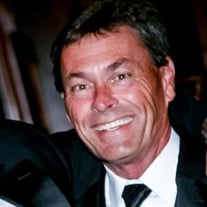 Mattoon, IL-Craig Stephen Dixon, age 64, of Mattoon, IL, passed away at 7:17 pm, Monday, November 21, 2016. He lost his battle to ALS (Lou Gehrig's) disease, which he was diagnosed with fall of 2013. A funeral service in his honor will be celebrated on Saturday, November 26, 2016 at 2:00pm at the First Presbyterian Church with Pastor Matthew Froeschle officiating. Interment will be held at a later date. Visitation will be held at the church from 11:00 am until the service begins. Mitchell-Jerdan funeral home is assisting the family with arrangements. Craig was born in Effingham, IL on December 17, 1951, the son of Lester and Maxine (Schoenhoff) Dixon. He married his high school sweetheart, Deanna Kay Arney, on July 14, 1974. Survivors include his loving wife Deanna of Mattoon, IL; three daughters, Hilarie Hernandez and husband John of Bloomington, Il, and their children, Cole, Averie, Sydnie, Tyson, and Allie; Haylie Dancer and her husband Brad of Champaign, IL, and their children Jackson, Hudson, Camden, and Griffin; and Heidi Wohltman and husband Doug of Effingham, IL, and their children Ryan and Laney. Craig is survived by his mother Maxine Dixon of Effingham, IL, one brother, Brent Dixon and wife Debbie of Mattoon, IL, two sisters, Penny Pals of Effingham, IL, and Dawn Byrum and husband Gary of Effingham, IL; his half-sister, Vivian Grimes and husband Tom of Granite City, IL. He is also survived by numerous in-laws including mother and father in-law Brad and Holly Arney of Effingham IL as well as many nieces, nephews, and cousins. Craig earned his Masters and Bachelor degrees in education, both from Eastern Illinois University in Charleston, IL. He retired from Mattoon Community Unit #2 as the assistant principal after having taught in the English department for many years. He served as basketball, track, and football coach before becoming the Mattoon High School golf coach. Craig was a lifelong member of the National Education Association and the Illinois Education Association. He attended the First Presbyterian Church of Mattoon IL. A member of the Mattoon Golf and Country Club, Craig frequently enjoyed a good game of golf. Over the years, he spent countless hours on the golf course sharing his passion for the game with family and friends. Craig was also an avid fan of horse racing. He and Deanna enjoyed many trips to Keeneland with friends betting on the ponies. Playing cards was another hobby Craig thoroughly enjoyed. He always looked forward to his days spent playing Gin while trying to take money from his buddies. Craig had an appreciation for the outdoors, and loved making memories during fishing trips to Minnesota with friends. More than anything, Craig adored his family and spending time with his children and grandchildren. Their “Gramps” always had room on his lap for one more. He had an ability to make each grandchild feel special by giving individual attention to them whenever he had the chance. He took a vested interest in all of their hobbies, and had an affinity for watching his grandchildren play sports. He was the best "Gramps" a child could have. Memorial contributions in his honor may be made to the ALS Association, St. Louis Regional, 2258 Weldon Parkway, St. Louis, MO 63146 or Lincolnland Hospice, 1004 Health Center Drive, Prairie Pavilion 2, Ste 202, Mattoon, IL 61938 Please visit www.mitchell-jerdan.com or www.facebook.com/mitchelljerdanfuneralhome to light a virtual candle in his honor or share a memory with his family.

Mattoon, IL-Craig Stephen Dixon, age 64, of Mattoon, IL, passed away at 7:17 pm, Monday, November 21, 2016. He lost his battle to ALS (Lou Gehrig's) disease, which he was diagnosed with fall of 2013. A funeral service in his honor will be... View Obituary & Service Information

The family of Craig Stephen Dixon created this Life Tributes page to make it easy to share your memories.

Send flowers to the Dixon family.