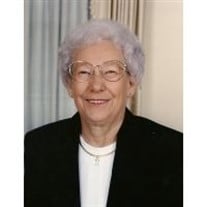 Cornelia C. Kepp, age 89, passed away peacefully at her home on Sunday, January 23rd with her family gathered around. \r\nFuneral services celebrating her life are scheduled for Tuesday, January 25th at 11:00 AM at Mitchell-Jerdan Funeral Home, 1200 Wabash Avenue, Mattoon, IL 61938. The Rev. Dr. Mark Prevo will officiate with the assistance of Rev. Robert C. Clark. Burial will be in Dodge Grove Cemetery immediately following the service. Visitation will be at the funeral home, from 9:00-11:00 AM, prior to the service.\r\nCorky was born in Taylorville, IL on May 5, 1921 to Lewis G. Colegrove and Ruth Foil Colegrove. She was educated in the Taylorville school system where she excelled in the award-winning concert band. She was an accomplished in the flute and piccolo earning Second Division Honors in the National High School Solo contest. She graduated from Sparks Business College where she met her husband of nearly 69 years. She married Warren B. Kepp in Eldorado, IL, on February 6, 1942. He survives. \r\nSurviving family members, in addition to her husband, include sons Warren C. Kepp (wife Ginny) of Springfield, Illinois, Stephen A. Kepp (wife Kelly) of Carson City, Nevada, and Philip B. Kepp, DDS (wife Peggy), of Mattoon; grandchildren; Becky Baltz (husband Michael) of Henderson, Nevada, Brian Kepp (wife Amanda) of San Francisco, California, Rachel Kepp of Chicago, Illinois, and Jennifer Kepp of Chicago, Illinois; step-grandchildren Timothy Bommelman of Bismark, North Dakota, Christine Coffey (husband Jason) of Lincoln, North Dakota, and John Bommelman of Carson City, Nevada; and great grandson, Trevor Baltz of Henderson, Nevada. Two brothers, Loren Colegrove and Lewis Colegrove preceded her in death. \r\nCorky was a dedicated 65 year member of the First Christian Church of Mattoon, the Mattoon Golf and Country Club, Delta Theta Tau, Daughters of the American Revolution, and Daughters of The Mayflower. She served as the West Side County Chairwoman of the Coles County Republican Party and had the honor of having lunch in the White House with First Lady Pat Nixon. She served for many years as the Secretary of the Coles County Jury Commission. In her primary role as wife and mother, she was quite active in PTA and Boy Scouts. She was an avid and accomplished bridge player winning several local duplicate and bridge marathon competitions. \r\nCorky was known for her vivacious personality and warm heart. She knew no strangers. \r\nIn lieu of flowers, memorials may be made to the First Christian Church or Lincoln Land Hospice.\r\n

Cornelia C. Kepp, age 89, passed away peacefully at her home on Sunday, January 23rd with her family gathered around. \r\nFuneral services celebrating her life are scheduled for Tuesday, January 25th at 11:00 AM at Mitchell-Jerdan Funeral Home,... View Obituary & Service Information

The family of Cornelia C. "Corky" Kepp created this Life Tributes page to make it easy to share your memories.

Cornelia C. Kepp, age 89, passed away peacefully at her home...