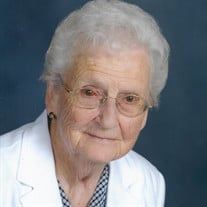 Mattoon, IL - Clonnie J. Birdsong, age 96, of Mattoon, IL, passed away at 4:40 p.m., on June 12, 2017, at the Odd-Fellow Rebekah Home. The funeral service in her honor will begin at 11:00 a.m., Saturday, June 17, 2017, at Mitchell-Jerdan Funeral Home, 1200 Wabash Avenue, Mattoon, IL 61938. Reverend Dr. John Calio will officiate. Interment will follow in Dodge Grove Cemetery. Visitation will be held from 10:00 a.m. until the service begins. Born January 19, 1921, in Hichita, OK, Clonnie was the daughter of James C. and Rachel (Davis) Burleyson. She married Ancel Lee Birdsong on January 28, 1939, in Lane, OK. He passed away March 8, 1998. Survivors include four children, Carroll Lee Birdsong and wife Linda of Creal Springs, IL, Patricia Joyce Karp and husband Neil of Dorr, MI, Harold David Birdsong and wife Sharon of Aldrich, MO, and Darold Dean Birdsong and wife Diane of Mattoon, IL; nine grandchildren; twenty-two great-grandchildren; four great-great-grandchildren; one step grandchild, one step great-grandchild; and several nieces and nephews. In addition to her husband, she was preceded in death by her parents, two brothers, three sisters, one grandson, and one step grandson. Mrs. Birdsong was member of the First Southern Baptist Church of Mattoon and for many years, worked at Knowles Café. Cooking and baking were a labor of love for her and she also enjoyed the outdoors fishing and gardening. Crocheting and knitting were among her talents. She was a passionate fan of University of Illinois Basketball. Memorials in her honor are requested to the First Southern Baptist Church Parking Lot Fund or the Alzheimer’s Association. Please visit www.mitchell-jerdan.com to light a virtual candle in her honor or share a memory with her family.

The family of Clonnie Joyce Birdsong created this Life Tributes page to make it easy to share your memories.

Send flowers to the Birdsong family.