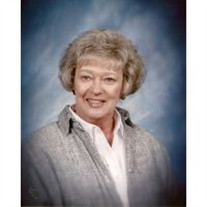 Charleston, IL-Chearie Margene Lindsay, age 74, of Charleston, IL, passed away at 3:44 p.m., Tuesday, February 21, 2012, at Sarah Bush Lincoln Health Center.\r\n\r\nThe funeral service in her honor will begin at 10:00 a.m., Saturday, February 25, 2012, at the Immaculate Conception Catholic Church, 320 N 21st St., Mattoon, IL. Reverend Dennis Kollross will officiate. Interment will be in Calvary Cemetery, Mattoon, IL. Visitation will be held Friday evening, 6:00-8:00 p.m., with Rosary Service at 7:45 p.m., at Mitchell-Jerdan Funeral Home, 1200 Wabash Avenue, Mattoon, IL 61938. \r\n\r\nBorn May 16, 1937, in Mattoon, IL, Chearie was the daughter of Ralph and Berdina (Walker) Harper, both deceased. She married Donald L. Myers in 1957; he passed away December 31, 1991. On December 21, 2001, she married Jerry D. Lindsay. He survives in Charleston, IL. She is also survived by one daughter, Nancy Reinhart and husband Jim of Decatur, IL; two grandchildren, Wesley L. Reinhart and Maria Reinhart, both of Decatur, IL; two step-children, Denise A. Verdeyen and husband Pat of Mattoon, IL, and Renee A. Spitz and husband Tim of Effingham, IL; and five step-grandchildren, Jeremy Plummer of Temecula, CA, Melissa Plummer of Mattoon, IL, Megan Verdeyen of Mattoon, IL, Lindsay Gordon of Humboldt, IL, and Andrew Spitz of Effingham, IL; one great grandchild, Caitlyn A. Breeze of Mt. Zion, IL; two step great grandchildren, Gavin Gordon and Hanna Plummer; one brother, Jack Harper and wife Janet of Mattoon, IL; one sister, Vera Adams and husband Darrell of Mattoon, IL; one aunt, Ruth Walker of Mattoon, IL; her best friend, Linda Grant of Charleston, IL; and two dogs, Betsy and Daisy. \r\n\r\nMrs. Lindsay was a member of the Immaculate Conception Catholic Church and a supporter of the Knights of Columbus. She had been joint owner of Little Mexico restaurant in Mattoon and Charleston, IL, Marianna Restaurant in Mattoon, IL, and Little Venice Restaurant in Charleston, IL, before retiring after 55 years in the restaurant business. \r\n \r\nChearie was a lifetime member of Beta Sigma Phi in Charleston, IL and Destin, FL, past President of the Coles County Zonta, and a member of the Loyal Order of the Elks, Mattoon Moose Lodge, and Charleston Country Club. She also served as an election judge for 15 years, and volunteered with Hospice and Meals on Wheels.\r\n\r\nChearie was an excellent cook and enjoyed painting in oil, watercolor, and chalk. She and her husband wintered in Destin, FL and loved to travel and entertain. She cherished her family and treasured time spent with them more than anything. \r\n\r\nIn lieu of flowers, the family requests that memorials in her honor be made to the Immaculate Conception Church, 320 N. 21st St., Mattoon, IL, 61938, or the charitable organization of the donor's choice.\r\n\r\nPlease visit www.mitchell-jerdan.com to light a virtual candle in her honor or share a memory with her family. \r\n

The family of Chearie Margene Lindsay created this Life Tributes page to make it easy to share your memories.

Send flowers to the Lindsay family.