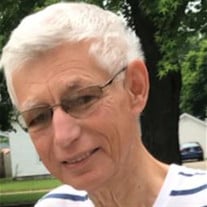 Charles “Chuck” F. Morgan, age 69 passed away at 11:20 P.M., Wednesday, April 3, 2019 at his residence. A funeral service in his honor will be held at 10:00 A.M., Tuesday, April 9, 2019 at Mitchell-Jerdan Funeral Home, 1200 Wabash Avenue, Mattoon, IL 61938; services will be conducted by Bill Fore. A committal service will immediately follow in Resthaven Memorial Gardens. A visitation will be held Monday evening, April 8, 2019 at the funeral home from 4:00 P.M. until 7:00 P.M. Masonic Rites will be conducted prior to the visitation at 3:45 P.M. Chuck was born October 17, 1949 in Mattoon, IL the son of Robert E. and Martha M. (Roark) Morgan. He married Debbra R. Benslay July 9, 1972 in Mattoon, IL. He is survived by his loving wife of forty-six years, Debbra Morgan; two children, Angie D. Hrvol and husband Gary, Brian C. Morgan and wife Monica; three grandchildren, Sierra Morgan, Dakota Renfro and Rose Hrvol all of Mattoon, IL; mother, Martha M. (Morgan) Bentley of Bradenton, FL; brother-in law, Michael Benslay and wife Debbie of Mattoon, IL; and sister-in-law, Jayne Gibson and husband Roger of La Grange, CA. He is preceded in death by his father. Chuck and Debbie were the former owners and operators of Morgan’s Meat Market for thirty-six years. Chuck was well-known amongst the community for his hard work, charitable donations and kind heart. He attended Broadway Christian Church in Mattoon, IL. Chuck was a member of Wabash Masonic Lodge #179 of Etna, IL, 32nd Degree Scottish Rite Mason of Danville, IL, Ansar Temple Shriner of Springfield, IL, VFW Auxiliary Lodge #4325, Moose Lodge #803, Eagles Lodge #3438 all of Mattoon, IL and Mattoon High 12 Club. Chuck took pleasure in fishing, wood working and outdoor cooking. He also enjoyed baseball and NASCAR. After his retirement, Chuck was anxious to spend his winters in Florida; however he never stayed away too long from his children and grandchildren. There was nothing more important to Chuck than his time spent and memories made with his family. He loved them dearly and they will miss him greatly. The family would like to express their gratitude to Dr. Abdur Shakir, Dr. Kiran Joag, Hospice Nurse Cassie Graham and all the nurses at Sarah Bush Lincoln Health Center and Cancer Center. Memorials in Chuck’s honor may be made to Sarah Bush Lincoln Cancer Center, 1000 Health Center Drive, Mattoon, IL 61938 or donor’s choice. Please visit www.mitchell-jerdan.com or www.facebook.com/mitchelljerdanfuneralhome to light a virtual candle or share a memory with the family.

The family of Charles "Chuck" F. Morgan created this Life Tributes page to make it easy to share your memories.