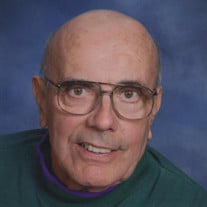 Charles R. Mears, age 76 of Mattoon, IL passed away on Sunday, August 16, 2020 at his residence surrounded by his loved ones. A funeral service in his honor will be held at 10:00 AM, Thursday, August 20, 2020 at Mitchell-Jerdan Funeral Home, 1200 Wabash Avenue, Mattoon, IL 61938; Pastor Fred Harner will officiate. A committal service will immediately follow in Dodge Grove Cemetery in Mattoon, IL. The visitation will be from 5:00 PM until 8:00 PM, Wednesday, August 19, 2020 at Mitchell-Jerdan Funeral Home. The son of the late Maurice R. and Mildred (Cearlock) Mears, Charles was born on May 2, 1944 in Vandalia, IL. He married Betty L. Guymon on June 12,1966 in Charleston, IL. He is survived by his devoted wife of fifty-four years, Betty Mears of Mattoon, IL; one son, Harold Mears and wife Carolyn of Maryville, TN; four grandchildren: Jennifer Mears of Knoxville, TN, Jessica Kidd and husband Murphy of Maryville, TN, Ashley Homann and husband Doug of Mattoon, IL, Colton Mears of Maryville, TN; four great-grandchildren: Temperance and Seth Burnell, Aubree Homann, and Brody Kidd; and his canine companion, Angel Ray. He is preceded in death by his daughter, Tina McFadden; son-in-law, Charles McFadden; and brother, Joseph Mears. Charles was a member of the First Southern Baptist Church of Mattoon, IL. He was a man of faith which infiltrated into all aspects of his life. In his early years, Charles worked for Dr. Podesta as a dental technician, and later opened his own lab where he worked with his wife Betty. However, his love of cars prevailed, and he soon began his impressive career as the owner and operator of Mears Automotive in Mattoon, IL. Charles proudly served the community with his knowledge and excellence in automobiles. He had a keen eye for vintage and classic cars and was a collector of antiques; his personal favorite being a 1955 Ford Crown Victoria in regency purple and snowshoe white. Charles had immense, glowing pride in our country. He believed in hard work, honesty, and making America great again. Throughout his life, Charles faced many hardships but met them with integrity, determination and grit. The small moments in life that Charles valued, made a monumental impact on others. He was an inspiration to all, especially his grandchildren. With a life filled with adventures and achievements, Charles was most proud of his family. He truly was one-of-a-kind. Please visit www.mitchell-jerdan.com or www.facebook.com/mitchelljerdanfuneralhome to light a virtual candle in his honor or share a memory with the family.

Charles R. Mears, age 76 of Mattoon, IL passed away on Sunday, August 16, 2020 at his residence surrounded by his loved ones. A funeral service in his honor will be held at 10:00 AM, Thursday, August 20, 2020 at Mitchell-Jerdan Funeral Home,... View Obituary & Service Information

The family of Charles R. Mears created this Life Tributes page to make it easy to share your memories.

Send flowers to the Mears family.