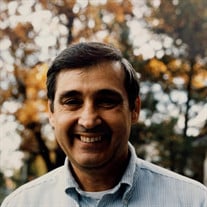 Charles “Charlie” Eugene Edwards, age 88 of Mattoon, IL passed away at 10:21 AM, Tuesday, May 24, 2022, at Clark-Lindsey Village in Urbana, IL. A funeral service will be held at noon, Tuesday, May 31, 2022, at Mitchell-Jerdan Funeral Home, located at 1200 Wabash Avenue, Mattoon, IL 61938; Reverend Ron Dickinson will officiate. A committal service will immediately follow in Dodge Grove Cemetery in Mattoon, IL. The visitation will be held from 10:00 AM until the time of service at the funeral home. Charlie was born on September 20, 1933, in Mattoon, IL to the late Avon P. and Amanda M. (Moutry)Edwards. He married Kathryn “Cassie” J. Cline on January 28,1955 in Mattoon, IL; she preceded him in death on January 4, 2016. He is survived by their two sons, Charles F. Edwards and wife Kathleen of Girard, IL, Brian E. Edwards of Mattoon, IL; three grandchildren, David Edwards and wife Nicole of Fenton, MO, Alexis Edwards of New York, NY, Lane Edwards of Edwardsville, IL; one great-granddaughter, Amelia Edwards of Fenton, MO; one brother, David Edwards of Mattoon, IL; three sisters, Linda Raymer and husband Gerald of Dallas, TX, Mary Cords and husband Don of Neoga, IL, and Barbara Bosley and husband David of Toledo, IL. He is preceded in death by one brother, Dale Edwards; and three sisters, Norma Walsch, Delores Cobb, and Geneva Cobb. Mr. Edwards honorably served our country in the United States Navy from 1951 until 1954 during the Korean War as a Navy Diver. After his honorable discharge, he attended Eastern Illinois University in Charleston, IL, obtaining a Bachelor’s Degree in Education and later receiving a Master’s Degree in Science and Biology from St. Thomas College in Minneapolis, MN. He had a longstanding career as educator in Science and Biology at Northwest High School for twenty-four years. He retired in 1987 and moved back to Mattoon, IL. Charlie was a devoted husband and loving father and grandfather. His memory will live on through the hearts of all his loved ones. Please visit www.mitchell-jerdan.com or www.facebook.com/mitchelljerdanfuneralhome to light a virtual candle in his honor or share a memory with the family.

The family of Charles "Charlie" E. Edwards created this Life Tributes page to make it easy to share your memories.

Send flowers to the Edwards family.