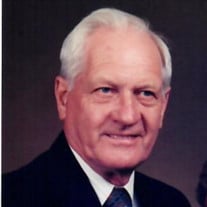 Charles V. Bartimus II, age 95 of Mattoon, IL passed away at 4:15 PM, Tuesday, June 2, 2020 at Odd-Fellow Rebecca Home in Mattoon, IL. A funeral service in his honor will be held at noon, Saturday, June 6, 2020 at Mitchell-Jerdan Funeral Home, 1200 Wabash Avenue, Mattoon, IL 61938; Rev. J Michael Smith will be officiating. A committal service will immediately follow in Mound Cemetery in Charleston, IL with Military Rites conducted by Mattoon VFW Post 4325. A visitation will be held from 10:00 AM until the time of service at Mitchell-Jerdan Funeral Home. Charles was born on April 4, 1925 in Mattoon, IL, to the proud parents, Charles V. and Mary Lucinda “Lucy" (Elston) Bartimus. He married Thelma Ruth Tutt on August 11, 1946 in Charleston, IL. He is survived by his wife of seventy-three years, Thelma Bartimus of Mattoon, IL; one son, Ted A. Bartimus and wife Maneasseaha of Falls Church, VA; three grandchildren, Ashley H. Bartimus of Villa Grove, IL, Paige K. Bartimus of Hammond, IL, Ted A. Bartimus II of Falls Church, VA; one great-granddaughter, Mila H. Heykoop of Hammond, IL; one sister, June Starwalt of Effingham, IL; and several nieces and nephews. He is preceded in death by three brothers, Robert, Leonard, infant Jimmy Bartimus; three sisters, Betty Connor, Charlene Andrews, and Melba Phillips; and one stillborn baby. Charles was a graduate of Toledo, IL High School before serving with distinction alongside his brothers in arms in the Navy on Destroyer Escort USS Charles J. Kimmel 1943-46 in the European and Pacific Theaters during World War II. After his discharge from the Navy, Charles furthered his education earning a Bachelor’s Degree in Education from Eastern Illinois University in Charleston, IL and a Master’s Degree in Botany from Southern Illinois University in Carbondale, IL. He then pursued a lengthy and rewarding career in Education starting as a High School and Elementary teacher and coach in school districts surrounding Mattoon, IL; became a principle at Seward, IL; a School Superintendent and basketball coach at Mayer, AZ; and Grade School Principal at Window Rock, AZ on the Navajo Reservation. Charles returned to Illinois in 1964 serving as School Superintendent in Minier, IL, Rankin, IL and Saybrook-Arrowsmith School District before retiring in 1981 and moving to Mattoon, IL. Not one to take to retirement easily he returned to work at Eastern Illinois University in Charleston, IL and as School Superintendent at Edinburg, IL School District. He was a member of the North Side Baptist Church in Charleston, IL, Veterans of Foreign Wars, the Illinois State Teachers Association, past president and member of the Lions Club in Saybrook, IL; past president of the Mayer, AZ Chamber of Commerce and ran for political office in Illinois as Superintendent of Public Instruction in 1972. In his few leisure moments he enjoyed gardening, camping with his wife, identifying plants, developing the family tree, researching the plight of Native American tribes, but nothing compared to the joy of spending summers with his grandchildren and family. His loss has capped a life well lived, a heart well loved and a legacy of memories that will stand the test of time. Memorials in his honor may be made to Alzheimer’s Association Illinois Chapter, 8430 W. Bryn Mawr Ave #800, Chicago, IL 60631. Please visit www.mitchell-jerdan.com or www.facebook.com/mitchelljerdanfuneralhome to light a virtual candle or share a memory.

The family of Charles V. Bartimus created this Life Tributes page to make it easy to share your memories.

Send flowers to the Bartimus family.