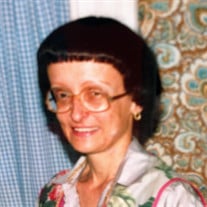 Mattoon, IL – J. “Camille” Compo, age 73, of Mattoon, IL, formerly of Charleston, IL, passed away at Palm Terrace Rehabilitation and Care Center on June 20, 2015. The memorial service in her honor will begin at 6:30 p.m., August 6, 2015, at the Newman Catholic Center in Charleston, IL. Mitchell-Jerdan Funeral Home, located at 1200 Wabash Avenue, Mattoon, IL, 61938 assisted with the arrangements. Born September 4, 1941, in Defiance, OH, Camille was the daughter of Robert W. and Marcella E. (Steinberger) Compo. Survivors include two brothers; John Compo and wife Susie, and Robert Compo; nephews: Daniel Conway and partner Pam of Vancouver, British Columbia, Canada, and Jeff Compo; and a niece, Betsy. She leaves three very dear friends, Jill Nilsen, Judy Barford, and Cheryl Gilbert, all of Charleston, IL. She was preceded in death by her parents. Her dear sister, Mary Elaine Conway, mother of Daniel, and resident of Saskatoon, Saskatchewan, Canada, passed away in March, 2015. Camille graduated from Defiance High School in 1959, earning a National Merit Scholarship. She chose to attend Marquette University, Milwaukee, anticipating a major in mathematics. Though remarkably successful in math, Camille changed fields in her junior year. She graduated summa cum laude in 1963 with an A.B. in theology and philosophy and a minor in English. Inspired by her studies, the upheavals of the 1960s, and the potential of the lay apostolate, Camille joined the International Catholic Auxiliaries, an American branch of Auxiliaires, Féminines Internationales Catholiques, headquartered in Brussels. The work of ICA in Chicago and around the world led Camille to seek a graduate degree in Teaching English to Speakers of Other Languages (TESOL). She began coursework at Columbia University, NYC, and completed her master’s degree at University of Illinois in 1970. Keeping in touch with ICA leaders and friends, Camille made several trips to Europe. These travels guaranteed her lifelong fluency in French. From 1976 to 1979, Camille worked as an adult educator (TESOL) for Chicago City Colleges. Having made several visits to friends in Charleston and being delighted with the many amenities and accessibilities of our city, Camille moved to Charleston. For the next 40+ years, Charleston was her home. She participated in peace action in Charleston and Champaign and was a member of a local branch of Women’s International League for Peace and Freedom. She began her work life at EIU in the Office of Budget and Planning and retired in 2001 as the Administrative Assistant to the Vice President of External Relations. She became very active with the Women’s Studies Council and was involved with the first Women’s History and Achievement month. The visionary work of the Women’s Studies program at EIU inspired Camille for all her Charleston years. Women’s Studies honored Camille Compo as their Woman of Achievement in 1984, for her many contributions to the program. Camille loved Eastern Illinois University. Many will remember her walking serenely about campus making deliveries as her work required, and enjoying the grounds and the people. Displays at Tarble Art Center rewarded her spirit. Concerts at Doudna were always on her calendar. She was quick to write thank-you notes with comments for all she appreciated. After retirement, Camille was a volunteer at the Neal Welcome Center. An invitation to tea guaranteed a beautifully set table and fine conversation. Widely read and worldly wise, Camille was a perceptive and eager listener for all her friends. Shop people loved having Camille stop in. This heroic lady who bore her lifelong illness with quiet gallantry will be dearly missed in our community. Please visit www.mitchell-jerdan.com or www.facebook.com/mitchelljerdanfuneralhome to light a virtual candle in her honor or share a memory with her family and friends.

The family of Camille J. Compo created this Life Tributes page to make it easy to share your memories.

Send flowers to the Compo family.