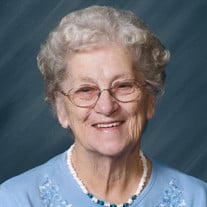 Gays, IL – Camilla Rose Wiley, age 91, of Gays, IL, passed away at 4:25 p.m., on September 15, 2016, at the Odd-Fellow Rebekah Home, Mattoon, IL. The funeral service in her honor will begin at 1:00 p.m., Tuesday, September 20, 2016, at Mitchell-Jerdan Funeral Home, 1200 Wabash Avenue, Mattoon, IL, 61938, with Pastor Virgil Baker officiating. Interment will follow in Resthaven Memorial Gardens. Visitation will be held at the funeral home, Monday evening, from 5:00 -7:00 p.m. Born September 5, 1925, in Gays, IL, Camilla was the daughter of Clem and Laura (Smith) Shafer. She married John D. Wiley, Sr. on July 21, 1943, in Sullivan, IL. She is survived by her loving husband of 73 years, John D. Wiley, Sr. of Gays, IL; and their son, John D. “Jack” Wiley, Jr., of Parkersburg, IL; three grandchildren, Hope Wooldridge and husband Mark of Plainfield, IL; David Wiley and wife Lori of Paris, IL, and Terri Clodfelter and husband Kenny of West Salem, IL. She also leaves six great grandchildren. She was preceded in death by her parents; four brothers, Delmar, Lawrence, Harold “Woody”, and Donald Shafer; one sister, June Greer; and a daughter-in-law, Nancy Wiley. A life-long resident of Gays, IL, Camilla was a beautician by trade and ran an in-home salon, as well as assisted her husband with the family farm until they retired. She was a member of the Mattoon Loyal Order of the Moose and Mattoon Eagles, and a former member and Worthy Matron of the Order of the Eastern Star of Gays. Camilla enjoyed traveling out west to South Dakota and California. However, family was the light of her life. She was a devoted wife and loving mom and grandma. She will be sadly missed by all. Please visit www.mitchell-jerdan.com or www.facebook.com/mitchelljerdanfuneralhome to light a virtual candle in her honor or share a memory with her family.

The family of Camilla Rose Wiley created this Life Tributes page to make it easy to share your memories.

Send flowers to the Wiley family.