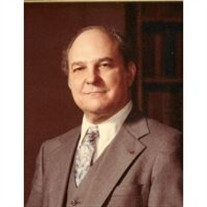 Carl Edwin Ferguson, 81, of Mattoon, passed from this life at 10-:45am on Friday, January 5, 2007 at Carle Foundation Hospital in Urbana.\r\n\r\nEd was preceded in death by Bonnie, his wife of 56 years, who passed away October 4, 2005. His parents Fannie Cecil Stephens Ferguson and Sanford Andrew Ferguson and only brother, Doyle Truman Ferguson also preceded him in death.\r\n\r\nEd was born May 17, 1925 near Medicine Mound, Texas and grew up on the family farm in the West Texas plains. He grew up without electricity, as the electric power line had not been extended to the rural United States, thus literally studying by kerosene lamp. He graduated from Medicine Mound High School in 1942 as salutatorian. He enlisted in the U.S. Army Air Corp in 1943, graduated gunnery school and went into flight training. He served as a flight engineer, attaining the rank of sergeant. It was not until he entered the Air Corps that he learned the benefits of electricity.\r\n\r\nAt the end of World War II, he enrolled at Oklahoma A & M College (now Oklahoma State University) under the G. I. Bill to study Agricultural Engineering. Ed knew the struggles of living and farming without electricity and wanted to make his career in the rural electric field. While there, he met Bonnie Laurine Maxey, who became his wife on September 6, 1949. Upon graduation, he accepted a position as engineer-line superintendent with Kay Electric Cooperative in Blackwell, Oklahoma. Their three children, Mike, Dana and Steve, were all born in Blackwell. \r\n\r\nThe family moved to Mattoon in 1962 when Ed accepted a position as Manager of Coles-Moultrie Electric Cooperative. Ed served in this position until his retirement in 1990. His role in the rural electric field expanded as he helped found Soyland Power Cooperative, the first generation and transmission cooperative in Illinois, and served as President of the Board of Directors. He was also elected by his fellow managers throughout the U.S. to serve two terms on the Board of Directors of the National Rural Utilities Cooperative Finance Corporation. \r\n\r\nUpon the occasion of the 50th Anniversary of the Rural Electrification Act, Ed wrote a note to his children, saying 'Rural Electrification has been and is my career'more than a career, it has provided honorable employment, steady work, job satisfaction, and with your mother's good help, we have been able to assist in the education of you three.'\r\n\r\nEd was also active in serving the Mattoon Community. He was director of the Mattoon Association of Commerce and Coles Together, as well as other economic development organizations. An active Kiwanis member of 50 years, he was past president of the Mattoon Kiwanis Club. He was a faithful volunteer in the club's participation in Peace Meals since the program's inception and even completed a delivery route while experiencing a silent heart attack in 1984. He continued to deliver peace meals until the age of 80 when his own health prevented him from participating.\r\n\r\nA member of the First United Methodist Church of Mattoon since 1962, he served on the Board of Trustees and various committees, including the Finance and Pastor-Parish committees. He was also active in his Champion Sunday School Class. \r\n\r\nEd loved his family, his children and grandchildren. He was a proud father and grandfather who delighted in attending all the recitals, concerts and school events throughout the years. He even served as CubMaster for his son's Cub Scout pack.. In November, 2006 he visited Washington, D.C. to see his grandson Tyler, who was serving as a U.S. Senate intern while studying at the American University. While there, he and his family were able to visit the National World War II Memorial.\r\n\r\nEd is survived by his three children, Mike (wife Linda) of Tulia, Texas, Dana Hall (Husband Dick) of Canton, Georgia, and Steve (Wife Melissa) of Mattoon; his grandchildren Tyler and Audra of Mattoon, and his brother's children, Kay Mason of Tennessee and Norman and Sandy Ferguson of Oklahoma. His beloved dogs Izzie and Melody also survive him.\r\n\r\nEd's life, the love he shared, and his service to family, community and country, will be honored at funeral services Tuesday, January 9, 1:30pm, at the First United Methodist church in Mattoon with Rev. James Rhea and Rev. Eugene Black officiating. Interment will follow in Dodge Grove Cemetery. Visitations will be Monday, 5-7pm, at Mitchell-Jerdan Funeral Home and Tuesday, 1-1:30 at the church. Masonic Rites will be conducted at 7:00 p.m. Monday at the funeral home. Memorial contributions are suggested to the First United Methodist Church or Coles County Humane Society

Carl Edwin Ferguson, 81, of Mattoon, passed from this life at 10-:45am on Friday, January 5, 2007 at Carle Foundation Hospital in Urbana.\r\n\r\nEd was preceded in death by Bonnie, his wife of 56 years, who passed away October 4, 2005. His parents... View Obituary & Service Information

The family of C.E. 'Ed' Ferguson created this Life Tributes page to make it easy to share your memories.

Carl Edwin Ferguson, 81, of Mattoon, passed from this life at...

Send flowers to the Ferguson family.