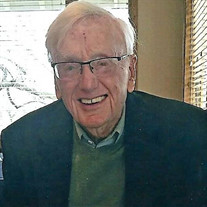 Brye James Radebaugh, age 96 of Mattoon, IL passed away at 6:36 A.M., Friday, January 19, 2018 at Mattoon Health Care Center in Mattoon, IL. Private family graveside services will be held at Dodge Grove Cemetery in Mattoon, IL. Mitchell-Jerdan Funeral Home is assisting the family with arrangements. Born in Danville, IL, on June 28, 1921, Brye was the son of Orville and Olive (Littler) Radebaugh. He married Billie Lou Baggett on July 1, 1944 in Little Rock, AR. They were married seventy-one years before her death on April 30, 2016. He is survived by his two children, James Brewster Radebaugh and his wife Sondra of Galena, OH, and Malinda Ann Sawyer and her husband Thomas of Mattoon, IL; seven grandchildren, Jason Sawyer, Justin Sawyer, Erin Radebaugh, Eden Radebaugh, Jamie Devoe, Caroline Hilty and Andrew Cronin; he is also survived by nine great-grandchildren. Commissioned into the Airforce at Harvard University, Brye was a Veteran of WWII serving four years in the Pacific Theater in the 20th and 13th United States Airforces, stationed primarily on Iwo Jima and in the Philippines. He spent forty years in the wholesaling and manufacturing of plumbing, heating and cooling equipment. Brye was a member of the First Presbyterian Church in Mattoon, IL, a member of the Rotary Club of Mattoon, IL receiving multiple Paul Harris awards, a life member of the University of Arkansas Alumni Association, a life member of the United States Airforce Reserve, a member of the Mattoon Golf and Country Club, a member of the American Legion in Mattoon, IL and a member of KAPPA ALPHA Fraternity. Aside from spending time with his family, Brye enjoyed nothing more than traveling with his wife. He and Billie visited all 50 states, over 100 countries, and all 7 continents. The family suggests and would greatly appreciate if those wishing to make memorial contributions in his honor would choose the First Presbyterian Church, 10 Charleston Ave., Mattoon, IL 61938, or the YMCA, 221 N. 16th St., Mattoon, IL 61938 for maintenance of the walking track. Please visit www.mitchell-jerdan.com or www.facebook.com/mitchelljerdanfuneralhome to light a candle in his memory or share a memory.

The family of Brye James Radebaugh created this Life Tributes page to make it easy to share your memories.

Send flowers to the Radebaugh family.