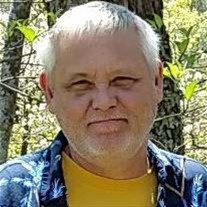 Mattoon, IL – Brian Dwayne Laymon, age 58, of Mattoon, IL, passed away at 1:15 a.m., Tuesday, November 15, 2016, at his residence. The funeral service in his honor will begin at 1:00 p.m., Monday, November 21, 2016 at Mitchell-Jerdan Funeral Home, 1200 Wabash Avenue, Mattoon, IL 61938, with Pastor Josh Butler officiating. Visitation will be held at the funeral home from 11:00 a.m. until the time of service. Born April 7, 1958, in Tuscola, IL, Brian was the son of Donald and Ida Mae (Key) Laymon. He married Lori Fultz on December 31, 2006 on their property in rural Coles County, she survives. He is also survived by three step-children: Greg Fultz of Mattoon, IL, Robert Pehm and his wife Chrissy of Springfield, IL, and Dusty Fultz of Springfield, IL; one brother, Phil Laymon of Mattoon, IL; one sister, Laurel Zachow of Mattoon, IL; two step-grandchildren: Ivan Pehm, 7 of Springfield, IL, and Freyja Fultz, 4 of New Mexico; Two nephews, Matt Laymon and Tom Zachow; and one niece, Amber Zachow. He was preceded in death by his parents Mr. Laymon served our country with the United States Navy. He had a passion for computers and technology and put his skills to use with Hydro-Gear in Sullivan, IL, as an electronic technician. Having earned his Eagle Scout Badge in 1975, Brian loved fishing and being outdoors, especially working his mushroom farm. He was also an avid Green Bay Packers fan. Please visit www.mitchell-jerdan.com or www.facebook.com/mitchelljerdanfuneralhome to light a virtual candle in his honor or share a memory with his family.

The family of Brian Dwayne Laymon created this Life Tributes page to make it easy to share your memories.

Send flowers to the Laymon family.