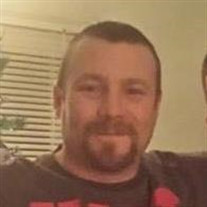 Mattoon, IL – Brian Dean Blakemore, age 40, of Mattoon, IL, passed away at 11:08 a.m., Tuesday, January 31, 2017 at Carle Foundation Hospital in Urbana, IL. The funeral service in his honor will be held at 7:00 p.m., Tuesday, February 7, 2017, at Mitchell-Jerdan Funeral Home, 1200 Wabash Avenue, Mattoon, IL 61938. Shine Doughty will officiate. Burial will be held at a later date. Visitation will be held at the funeral home Tuesday evening from 4:00 – 7:00 p.m. Born May 14, 1976, in Mattoon, IL, Brian was the son of Bob Fultz Sr. and Joyce Blakemore. He married Tanya Burks, she survives. He is also survived by his father, Bob Fultz Sr. of Manchester, KY; five children, Josiah Blakemore of Mattoon, IL, Nathaniel Blakemore and his wife Olivia stationed in Clarksville TN, Allison Blakemore and fiancé Aaron Butler of Mattoon, Briley Blakemore and Braylen Blakemore of Mississippi; four brothers, Bobby Fultz Jr. and his wife Jami of Florida, Bobby “Buck” Fultz and his wife Elizabeth of Stamping Ground, KY, Chad Fultz and his wife Heather of Manchester, KY, and Chris Fultz and his wife Lindsay of Manchester, KY; two sisters, Melissa Fultz, and Jennifer Grey both of Manchester, KY; two grandchildren, Kaiden Blakemore Ellison, and Emery Butler both of Mattoon, IL. He was preceded in death by his mother, step father Vito Graziano; grandfather, Wendell Blakemore, and one uncle, John Blakemore. In his free time, he loved fishing, and playing poker; however, he enjoyed nothing more than spending time with his family. Memorials in his honor may be made to the family. Please visit www.mitchell-jerdan.com or www.facebook.com/mitchelljerdanfuneralhome to light a virtual candle in his honor or share a memory with his family.

The family of Brian Dean Blakemore created this Life Tributes page to make it easy to share your memories.

Send flowers to the Blakemore family.