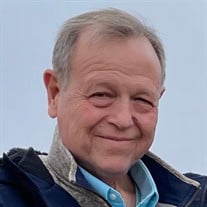 Bradley “Brad” Davis Franklin, age 69 of Mattoon, IL passed away at 4:50 AM, Tuesday, November 9, 2021, at Carle Foundation Hospital in Urbana, IL. A funeral service in his honor will be held at 3:00 PM, Saturday, November 13, 2021, at Apostolic Center Church, 205 N. Country Club Road, Mattoon, IL 61938. Reverend Derold Doughty will officiate with the assistance of Reverend Shine Doughty and Reverend Jeremy Doughty. A committal service will immediately follow at Dodge Grove Cemetery in Mattoon, IL. Military Rites will be conducted by Mattoon VFW Post 4325. The visitation will be held from 1:00 PM until the time of service at the church. Mitchell-Jerdan Funeral Home, 1200 Wabash Avenue, Mattoon, IL 61938 is in charge of services. Brad was born on May 26, 1952, in Vandalia, IL to the late Billy Davis and Valeria June (Reeves) Franklin. He married Annette Yvonne Sanders on February 19, 1986; she survives and resides in Mattoon, IL. He is also survived by four children, Shannon D. Franklin of South Bend, IN, Travis J. Franklin of Effingham, IL, Myles A Franklin of Mattoon, IL; Ashley N. Franklin of Mattoon, IL; one brother, Brett A. Franklin of Charleston, IL; and nine grandchildren: Gage A., Gunner J., Remmy L., Harper R., Maddox D., Coen W., and Isabella S. Franklin, and Harper S. and Everly G. Thacker. Brad proudly served our country in the United States Air Force and National Guard as a Caliber Marine stationed at Loring Air Force Base in Maine. Upon his honorable discharge, Brad enrolled at Lakeland College in Mattoon, IL and later served on the Mattoon Police Department. Brad eventually found his true passion in auto sales. For many years, he was employed with Comer Nissan Mazda as the former manager, and for the last seventeen years in the sales department at KC Summers Auto Group in Mattoon, IL. A constant fixture within the community, Brad thrived on meeting and visiting with all people. He never met a stranger, only a friend. Devoted to his faith, Brad was actively involved in the Apostolic Center Church in Mattoon, IL. Always generous with his time, he wanted to spread his faith among others on numerous mission trips to Dominican Republic and Honduras over the years. In his younger years and amongst his many achievements, Brad was offered to participate on a minor league baseball team. A true family man, Brad declined the offer to be with his wife and raise his children. However, his passion for sports never diminished and was an avid St. Louis Cardinals and New England Patriots fan. Brad was happiest when surrounded by his wife, children, grandchildren, and his dog Rosie. He always looked forward to Friday night football games and recitals for his grandchildren, and a nice round of golf. He had gift of providing kindness and compassion to all he knew. Above all else, Brad will be remembered as a Godly man, dear friend, and loving husband, father, and grandfather. Please visit www.mitchell-jerdan.com or www.facebook.com/mitchelljerdanfuneralhome to light a virtual candle in his honor or share a memory with the family.

The family of Bradley "Brad" Davis Franklin created this Life Tributes page to make it easy to share your memories.

Send flowers to the Franklin family.