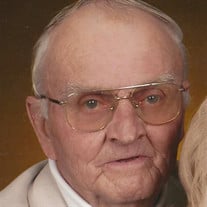 Billy Dale Katz, age 81 of Mattoon, IL, passed away at 6:10 P.M., Friday, February 16, 2018 at Mattoon Health Care. The funeral service in his honor will be held at 10: 00 A.M., Saturday, February 24, 2018 at First Baptist Church, 1804 S. 9th Street, Mattoon, IL, with Reverend Dennis Strawn and Pastor Travis Spencer officiating. Burial will immediately follow at Campground Cemetery in Paradise Township. Military Rites will be conducted by the Mattoon VFW Post 4325. The visitation will be held at the church from 5:00 P.M.-7:00 P.M., Friday, February 23, 2018. Mitchell-Jerdan Funeral Home is assisting the family with arrangements. Billy was born on July 31, 1936 in Effingham, IL, the son of Delbert and Myrtle (Plew) Katz. He married Henrietta Walls on October 27, 1961 in Mattoon, IL; she passed away on February 7, 2017. He is survived by his two children; one daughter Angi Dallas and husband Les of Mattoon, IL; one son Michael Katz and wife Jamie of Mattoon, Il; four grandchildren, Suzanne Black and Gabe Black of Mattoon, IL; Nicole Katz of Mattoon, IL, and Matt Black of Chicago Heights, IL. His parents, wife, two brothers Dean Katz and Harold Waters, and one sister Geraldine Ledbetter precede him in death. Billy was a member of the First Baptist Church in Mattoon, IL, and honorably served our country in the Army from 1960-1966. After the Army, he was employed by Bricklayers and Allied Craftsman; Billy earned the nickname “Doc” due to his outstanding ability to doctor up various projects that needed to be completed. Billy was a member of the Union Local #17 of Champaign, IL and enjoyed fishing. He devoted all of his free time to his family, never missing a program or event. He would light up when his children and grandchildren came to visit, telling stories and jokes, filling the room with laughter. He will be missed but his sense of humor and spirit will live on. Please visit www.mitchell-jerdan.com or www.facebook.com/mitchelljerdan to light a virtual candle in his honor or share a memory with the family.

The family of Billy Dale Katz created this Life Tributes page to make it easy to share your memories.

Send flowers to the Katz family.