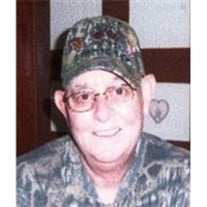 MATTOON - Bill R. Jennings, 62, of Mattoon, IL. passed away at 12:40 p.m. Friday, June 13, 2008 at his home surrounded by his family. The funeral service in honor of his life will be held at 11:00 a.m., Tuesday, June 17,2008 at Mitchell-Jerdan Funeral Home with the Rev. Frank Meyers officiating. Visitation will be held from 5:00-8:00 p.m., Monday, June 16, 2008 at the funeral home. Mr.Jennings was born April 24, 1946 in Mattoon, IL. He married Paula Raye Hilligoss on August 22, 1986 in St. Louis, MO; she survives. Survivors also include four children, Tracy Himes and husband Mel of Mattoon, IL., Troy Jennings of Mattoon, IL., Christy Allen and husband Thatcher of Arcola, IL., and Tonya Jennings and fiance Todd Pearson of Mattoon, IL., eight grandchildren, Benjamin and Jordyn Himes, Zachary and Karsha Jennings, Kelsea and Katelyn Allen and Shelby and Dalton Orndoff; his brother, Max Dean Martz of San Antonio, TX.; two sisters, Brenda Robison and husband Paul of Flora, IL. and Pat Hite and husband Milton Sr. of Loxa, IL.; special nephew and nieces, Jason Krutsinger, Jade McDowell and Johnna Morrison and his beloved dog, Abbey. His parents, Everett J. and Betty Lou (Steele) Jennings and his grandparents preceded him in death. Mr. Jennings was a truck driver for 45 years and was a member of OOIDA. He was a man who never met a stranger. He loved riding motorcycles, mowing the lawn on his John Deere tractor and going to Gill''s. His greatest joy was spending time with family and friends. He will be dearly missed. Memorials may be made to the American Cancer Society, P.O. Box 22718 Oklahoma City, OK 73123-1718. Please visit www.mitchell-jerdan.com to light a virtual candle in Bill''s honor, or to share a memory with the family.

The family of Billy R. Jennings created this Life Tributes page to make it easy to share your memories.

Send flowers to the Jennings family.