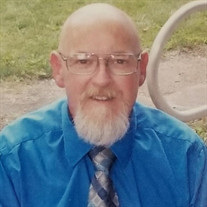 Billie E. Morgan, age 54 of Neoga, IL, after a hard-fought battle with cancer, passed away peacefully Friday, August 3, 2018 at 7:07 P.M. at home surrounded by family. A funeral service in his honor will be held Wednesday, August 8, 2018 at 10:00 A.M. at Mitchell-Jerdan Funeral Home, 1200 Wabash Avenue, Mattoon, IL 61938; Reverend Bobbie Reynolds will officiate. Burial will follow immediately in Pleasant Grove Cemetery in Cooks Mills, IL. Visitation will be held Tuesday evening, August 7, 2018 from 5:00 P.M.-8:00 P.M. at the funeral home. Bill was born in Mattoon, IL on June 12, 1964, the son of Edward L. and Myrtle J. (Ward) Morgan. He married Wendy L. Peters on September 22, 1990 in Mattoon, IL. He is survived by his loving wife; four children, Andrew T. Eichel of Atlanta, GA, Autumn L. Morgan and husband Mitch Turner of Mattoon, IL, Adam E. Morgan of Indianapolis, IN, and Alec C. Morgan of Carbondale, IL; four grandchildren, Gavin P. Morgan, Mary J., Sally J., and Sandy L. Turner, all of Mattoon, IL; three sisters, Sharon “Sue” Rinehart and Loretta Robertson of Mattoon, IL, and Pamela Shore of Maryville, CA.; as well as too many nieces and nephews to count. He is preceded in death by his parents and three brothers, Jack and infant twins Mitchell and Michael Morgan. Bill was a former employee of Justrite Mfg. in Mattoon, IL, Schrock Cabinets in Arthur, IL, RR Donnelley in Mattoon, IL, and Trailmobile in Charleston, IL, but he was most proud of the work he did on airplane interiors at Coles County Memorial Airport. He was an honorary member of the Flatlanders RC. Bill was known for attending numerous auctions, in search of treasures and “rusty gold” to add to his collection of toys and antiques. He especially enjoyed fishing along the creeks and river near Humboldt and Cooks Mills. In the end, the thing he prized the most was being “Poppy” to his four grandchildren. Please visit www.mitchelljerdan.com or www.facebook.com/mitchelljerdanfuneralhome to light a virtual candle in his honor or share a memory with the family.

Billie E. Morgan, age 54 of Neoga, IL, after a hard-fought battle with cancer, passed away peacefully Friday, August 3, 2018 at 7:07 P.M. at home surrounded by family. A funeral service in his honor will be held Wednesday, August 8, 2018 at... View Obituary & Service Information

The family of Billie E. Morgan created this Life Tributes page to make it easy to share your memories.