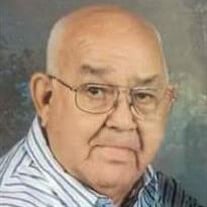 Bill G. Harrelson, age 82, of Mattoon, IL, passed away August 24, 2017, at 1:18 A.M. at his residence The funeral service in his honor will be held at 11:00 a.m. Saturday August 26, 2017 at Mitchell-Jerdan Funeral Home, 1200 Wabash Avenue, Mattoon, IL, 61938 with Reverend Tom Butler officiating. Burial will follow in Pleasant Grove Cemetery in Cooks Mills, IL. Visitation will be held at the funeral home Friday evening from 5:00 p.m. to 7:00 p.m. Masonic Rites will begin at 4:30 p.m. Bill was born February 1, 1935 in Hamilton County, IL the son of William G. and Mabel L (Clark) Harrelson. He married Barbara J. Bailey on June 10, 1956, she survives her wonderful husband, he is also survived by his children; three daughters, Debbie Williams of Cooks Mills, IL, Diana Morgan her significant other Gene Watts of Cooks Mills, IL, and Donna Harrelson of Cooks Mills, IL; two sons, David Harrelson and wife Carol of Windsor, IL, and Danny Harrelson and wife Colleen of Magnet, IL; one brother, Jim Harrelson and wife Ann of Mcleansboro, IL; seven grandchildren, Alisha Day and husband Jim of Cowder, IL, April Cole and husband Aaron of Windsor, IL, Heather Hughes and husband Jared of Cooks Mills, IL, Heidi Heath and husband Chris of Mattoon, IL, Casey Wilson and husband Allen of Hindsboro, IL, Emily Harrelson of Champaign, IL, and Abby Harrelson of Magnet, IL; four great-grandsons, four great-granddaughters, and one on the way. He was preceded in death by his parents, one great-grandson, Timmy Norfleet; two son-in-laws, Dan Morgan, and Mike Williams; and one sister, Eva Margaret Rodgers. Bill was a member of the Word of Life Baptist Church in Mattoon, IL. He was employed by Progress Industries, Columbia Machine, before retiring from Eastern Illinois University in Charleston, IL. Mr. Harrelson was a dedicated member to the Wabash Masonic Lodge #179 of Etna, IL and helped the community by co-founding and being a past board member of Cooks Mills Water Association. He could often be found enjoying Mother Nature, fishing, camping, and wood working. There was nothing Bill liked more than an interesting conversation with a friend; he did not know a stranger, but above all he cherished his time with his family, especially his grandchildren and great-grandchildren. Mr. Harrelson was adored by all who knew him. Memorials in his honor may be made to Word of Life Baptist Church building fund. Please visit www.mitchell-jerdan.com or www.facebook.com/mitchelljerdanfuneralhome to light a virtual candle in his honor or share a memory with the family.

The family of Bill Gail Harrelson created this Life Tributes page to make it easy to share your memories.

Send flowers to the Harrelson family.