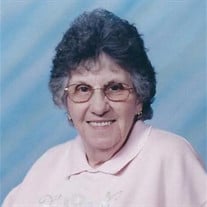 Mattoon, IL – Betty Jane Godden, age 86, of Mattoon, IL, passed away at 10:38 p.m., Thursday, January 14, 2016 at Sarah Bush Lincoln Health Center. The funeral service in her honor will begin at 12:00 p.m., Monday, January 18, 2016, at Mitchell-Jerdan Funeral Home, 1200 Wabash Avenue, Mattoon, IL, 61938. Reverend Dan Fultz will officiate. Interment will follow in Resthaven Memorial Gardens. Visitation will be held at the funeral home from 10:00 a.m. until the service begins. Born May 2, 1929, in Mattoon, IL, Betty was the daughter of Walter and Elizabeth Ermine (Matthews) Taylor. She married Ray E. Godden in Mattoon, IL, in 1966. He passed away October 2, 1983. Survivors include her daughter, Frances (Tiger) Hale and husband Jeffery of Windsor, IL; four step-children: Susan Beals of Sugar Hill, GA, Peggy Smith of Mattoon, IL, Jeanine McVicker and husband Mike of Mattoon, IL, and Mike Godden of Sullivan, IL; two grandchildren, Anita MaRia Hale of Windsor, IL, and Angela Beck and husband Trent of Windsor, IL; four great-grandchildren, Desirae Milligan, Brandon Milligan, Benjamin Beck, and Haley Beck, all of Windsor, IL; and six step-great grandchildren. In addition to her husband, she was preceded in death by four brothers and one sister. Prior to retiring in 1991, Mrs. Godden was employed by General Electric in Mattoon, IL. She was a member of the Eagles Ladies Auxiliary, the VFW Ladies Auxiliary, the American Legion Ladies Auxiliary, and Women of the Moose, all of Mattoon, IL. She was a former member of the Order of the Eastern Star. Betty enjoyed BINGO, was an avid reader, and a talented quilter. Last year alone, she completed seven quilts in time to give them as Christmas gifts. Family was the center of Betty’s life, and she enjoyed nothing more than spending time with them. The family would like to express their sincere gratitude to her special friends, Kay and Dan Horn, Kelly Ard, and Betty Rice. Please visit www.mitchell-jerdan.com or www.facebook.com/mitchelljerdanfuneralhome to light a virtual candle in her honor or share a memory with her family.

The family of Betty Jane Godden created this Life Tributes page to make it easy to share your memories.

Send flowers to the Godden family.