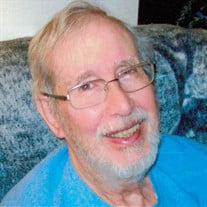 Bennett Clay Moulder, age 85 of Shelbyville, formerly of Mattoon, IL passed away peacefully at Good Shephard Hospital in Shelbyville, IL at 9:31 PM, January 19, 2020. A visitation in his honor will be held on Friday, January 24,2020 from 4:00 PM-6:00P PM at Mitchell-Jerdan Funeral Home, located at 1200 Wabash Avenue, Mattoon, Il 61938. Bennett was born May 29, 1934 in Red Boiling Springs, TN the son of the late John Henry Moulder and Ina Vio (Parkhurst) Moulder. He married Joyce Evelyn Stone on February 16, 1957 in Mattoon, IL. He is survived by his wife, Joyce Moulder of Shelbyville, IL; two daughters, Melinda McGee and husband Bryan of Jacksonville, IL, Rebecca Moxley and husband Jim of Peru, IN; nine grandchildren: Bryan E.S. McGee and wife Crystal of Jacksonville, IL; Aubrey Y. Coats of Peru, IN; Jeremiah B.Willner of Peru, IN; Megan M. Morris of Paol, IN; Sarah J. Bauder and husband Zack of Mary, IN; Bennett H. Peterson and wife Toni of Logansport, IN; Nicholas M. Manker of Jacksonville, IL; Benjamin Nelson and wife Tiara of Springfield, IL; Ronnie L. Nelson of Jacksonville, IL; fifteen great-grandchildren; and one son-in-law, Chad Nelson of Jacksonville, IL. Bennett is proceeded in death by one daughter, Mary Ruth Nelson. At an early age, Bennett had an aptitude for learning and continued his education by earning a Bachelor of Science from Eastern Illinois University in Charleston, IL and went on to get a Master of Science from the University of Illinois in Champaign-Urbana, IL. He later added a PhD in both Entomology and Zoology from the University of Tennessee in Knoxville, TN to his line of accolades. Bennett was a former teacher at Mattoon High School before becoming a professor at the University of Tennessee, Kentucky Southern College in Louisville, KY, and later retired from Illinois College in Jacksonville, IL after twenty-seven years. He was loved by his students and respected by his colleagues. Mr. Moulder was an accomplished author of the informational book Common Spiders of Illinois which is on display at the Illinois State Museum in Springfield, IL. Bennett was a very religious man and an active member of the Baptist Church. He liked watching baseball and was an avid St. Louis Cardinals fan, and loved listening to his favorite musical duo, Homer and Jethro. He had an impressive collection of stamps and attended conventions in Springfield, IL to meet others who shared his passion. Mr. Moulder could light up a room with his awesome sense of humor; Bennett was a devout family man who adored his wife and daughters. Memorial in his honor may be made to St. Jude Children’s Research Hospital, 501 St. Jude Place, Memphis, TN 38105. Please visit www.mitchell-jerdan.com or www.facebook.com/mitchelljerdanfuneralhome to light a virtual candle in his honor or share a memory

Bennett Clay Moulder, age 85 of Shelbyville, formerly of Mattoon, IL passed away peacefully at Good Shephard Hospital in Shelbyville, IL at 9:31 PM, January 19, 2020. A visitation in his honor will be held on Friday, January 24,2020 from 4:00... View Obituary & Service Information

The family of Bennett Clay Moulder created this Life Tributes page to make it easy to share your memories.

Send flowers to the Moulder family.