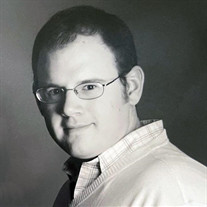 Benjamin “Ben” Martin Kane, age 41 of Oak Park, IL passed away at 8:17 PM, Thursday September 30, 2021, at Rush Medical Center in Oak Park, IL. A funeral Mass in his honor will be celebrated at 10:00 AM, Friday, October 15, 2021, at the Immaculate Conception Catholic Church, 320 North 21st Street, Mattoon, IL 61938. A committal service will be held immediately thereafter at Calvary Cemetery in Mattoon, IL. The visitation will be held from 9:00 AM until the time of service at the church. Mitchell-Jerdan Funeral Home, 1200 Wabash Avenue, Mattoon, IL 61938 is in charge of services. Ben was born in Mattoon, IL to Randal Louis and Terese Anne (Thoele) Kane. He is survived by his father Randal L. Kane of Sarasota, FL; his mother Terese A. Matthews and her husband Nick of Mattoon, IL; two sisters, Anna M. Higham and husband Tim of Monticello, IL; Maggie R. Huisinga and husband Roger of Monticello, IL; one stepbrother, Jeremy Matthews and wife Suzanne of Owensboro, KY; one stepsister, Jessica Matthews and significant other Jeffrey Schroeder of Ft. Myers, FL; three nieces, Jane, Eve, and Lucy; three nephews, Noah, Thomas and Lincoln. He was preceded in death by his grandparents. A graduate of Mattoon High School in Mattoon, IL, Ben later earned a degree in Economics from Eastern Illinois University in Charleston, IL. He studied for his Master’s Degree in Architecture at Illinois Institute of Technology in Chicago IL. Ben was self-employed as an architect. He had a broad knowledge of computers and was referred to by many as a computer whiz. Ben was an avid Chicago Black Hawks fan. His love of animals was evident as he adored his two dogs, Callie and Lilly. As a loving son, brother, uncle, and friend to many, Ben will be deeply missed and fondly remembered. Memorial gifts in his honor may be may to the Coles County Animal Shelter, 6818 N. Co. Rd. 1120 E, Charleston, IL 61920 Please visit www.mitchell-jerdan.com or www.facebook/mitchelljerdanfuneralhome to light a virtual candle in his honor or share a memory with the family.

The family of Benjamin "Ben" Martin Kane created this Life Tributes page to make it easy to share your memories.

Send flowers to the Kane family.