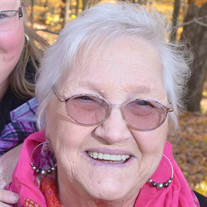 Barbara V. Peterson, age 79 of Mattoon, IL passed away at 5:15 AM, Wednesday, August 14, 2019 at Palm Terrace of Mattoon. A funeral service in her honor will be held at noon, Monday, August 19, 2019 at New Mercy Worship Center, 1208 Moultrie Avenue, Mattoon, IL 61938; Reverend Ed Stephens will officiate. A visitation will be held from 10:00 AM until the time of the service at the church. Mitchell-Jerdan Funeral, located at 1200 Wabash Avenue, Mattoon, IL is in charge of the services. Barbara was born on November 10, 1939 to the late William R. and Sara L. (Hersberger) Bullard. She married Phillip L. Malone in 1963; he passed away in 1978. She later married James T. Peterson in 1978 in Mattoon, IL; he preceded her in death. She is survived by her children; one daughter, Phyllis A. Malone on Mattoon, IL; two sons, Brad A. Malone and wife Jennifer of Mattoon, IL, Ralph T. Peterson and partner Laura Golladay of Mattoon, IL; one stepson, Gary Malone of Mattoon, IL; twenty-three grandchildren: Blake and Shelby Malone, Jamey and Heather Claxon, Nicole McKerrow, Trenton and Haley Peterson, Alyssa, Kayla, Dilen and Madyson Jenkins, Colby Chaney, Tina Malone-King, Becky Daniels, Paige Shiar-Lawhorn and many other special grandchildren; thirty-six great-grandchildren; and one brother, Charles R. Bullard of Daleville, AL. She is preceded in death by one brother, Earl F. Spaulding; one sister, Rosemary Bullard; stepson Phillip Malone; and one grandson, Trey Chaney. Barbara worked as a telephone operator at Sarah Bush Lincoln Health Center in Mattoon, IL for twenty-five years. She was a member of New Mercy Worship Center. Barbara was a loyal friend and devoted mother and grandmother. She was a momma to many, loved by all, and will be greatly missed. Memorials in her honor are to be made to the family. Please visit www.mitchell-jerdan.com or www.facebook.com/mitchelljerdanfuneralhome to light a virtual in her honor or share a memory with the family.

The family of Barbara V. Peterson created this Life Tributes page to make it easy to share your memories.

Send flowers to the Peterson family.