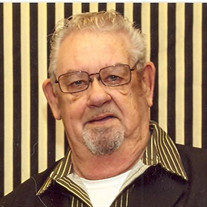 Mattoon, IL – Auttie Porter, Jr., age 79, of Mattoon, IL, passed away at 7:10 p.m., Friday, March 4, 2016, at his residence. The funeral service in his honor will begin at 6:00 p.m., Thursday, March 10, 2016, at the Apostolic Center, with Reverend Derold Doughty and Reverend Jeremy Doughty officiating. Visitation will be held at the church from 4:00 p.m., until the service begins. Mitchell-Jerdan Funeral Home, located at 1200 Wabash Avenue, Mattoon, IL 61938, is assisting the family with arrangements. Born March 13, 1936, in Belknap, IL, Auttie was the son of Auttie F. and Gracie L. (Stites) Porter. He married Mary A. Hunt on February 23, 1964, in Mattoon, IL. Survivors include his wife, Mary Porter of Mattoon, IL; four children: M. Scott Porter of Mattoon, IL, Sandra K Hiltebeitel and husband Bob of Daphne, AL, Kristy J. Urie and husband Dax of Riverview, FL, and Jeanette A. Porter of Mt. Carmel, IL; one brother, Raymond Porter and wife Deanie of Hartford, IL; eleven grandchildren; and three great-grandchildren. He was preceded in death by his parents, one brother, and one sister. Mr. Porter served our country with the United States Navy. He was a member of the Apostolic Center and was a retired employee of General Electric. Other memberships included the Mattoon American Legion Post 88; Mattoon VFW Post 4325, and the National Rifle Association, of which he was an avid member. Auttie enjoyed participating in church activities, fellowship, and dining out with his church family. His hobbies included riding motorcycles and playing guitar, though the moments he cherished most were those spent with his family and his beloved dog, Daisy. Please visit www.mitchell-jerdan.com or www.facebook.com/mitchelljerdanfuneralhome to light a virtual candle in his honor or share a memory with his family.

The family of Auttie Porter, Jr. created this Life Tributes page to make it easy to share your memories.

Send flowers to the Porter family.