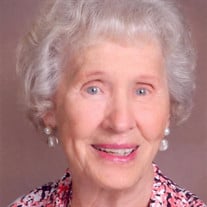 Mattoon, IL – Anna Rose Allison, age 85, of Mattoon, IL, passed away at 1:00 a.m., Friday, April 15, 2016, at her daughters residence in Savoy, IL. The funeral service in her honor will begin at 11:00 a.m., Tuesday, April 19, 2016, at Mitchell-Jerdan Funeral Home, 1200 Wabash Avenue, Mattoon, IL, with Rev. Matthew Froeschle officiating. Interment will follow in Resthaven Cemetery. Visitation will be held at the funeral home from 10:00 a.m. until the service begins. Born in Lawrence County, IL, on July 28, 1930, Anna was the daughter of Leonard and Nellie (Pinkstaff) Draper. She married George W. Allison on September 7th 1951; he passed away on October 25, 2013. Survivors include two daughters, Ann Williams and husband Ted of Savoy, IL, and Janice Allison and boyfriend Jim Giovannini of Booneville, IN; two grandchildren, David Williams and wife Denise of Avon, IN; and Heather Williams and fiancée Stephanie Wagner of Champaign, IL; Two great grandson’s Devin and Dylan Williams of Avon, IN; and one brother James Draper and wife Nadine of Frisco, TX. She was preceded in death by her husband, parents and one son, Wayne Allison. Mrs. Allison was a loving wife, mother, a homemaker, and a retired teacher from Oak Park, IL. She attended Eastern Illinois University and earned her bachelor’s degree in education from Elmhurst College. She received her master’s degree from Concordia College in River Forrest, IL. She was a member of the First Presbyterian Church, IEA, NEA, Mattoon Art Guild, YMCA, and the Mattoon Golf & Country Club; however, she treasured time spent with her family more than anything. Memorials in her honor may be made to First Presbyterian Church, 10 Charleston Ave, Mattoon, IL 61938, or the donor’s choice. Please visit www.mitchell-jerdan.com or www.facebook.com/mitchelljerdanfuneralhome.

The family of Anna Rose Allison created this Life Tributes page to make it easy to share your memories.

Send flowers to the Allison family.