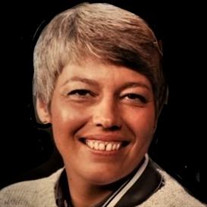 Ann J. Norberg, age 72 of Mattoon, IL passed away after a brave battle with cancer at 6:24 PM, Sunday, May 5, 2019 at Sarah Bush Lincoln Health Center in Mattoon, IL. A funeral service in her honor will be held at 10:00 AM, Tuesday, May 14, 2019 at Mitchell-Jerdan Funeral Home, 1200 Wabash Avenue, Mattoon, IL 61938 with Reverend Greg Sutter officiating. Burial will follow at 2:00 PM in Independent Order of Odd Fellows (IOOF) Cemetery in Norris City, IL. A visitation will be held Monday evening, May 13, 2019 from 5:00 PM-9:00 PM at the funeral home. Born on August 4, 1946, Ann was the daughter of the late Kenneth and C. Josephine (Wright) Cole. She married Oscar E. Norberg in May of 1978; he preceded her death on July 19, 1994. She is survived by one son, Thomas R. Carter and wife Susan of Swansea, IL; three grandsons, Thomas, Nicholas, and Calen Carter of Swansea, IL; one brother, Thomas Cole and wife Corky of Vienna, IL; one sister, Martha Whitson and husband Chuck of Colorado Springs, CO; three nephews and one niece. She is preceded in death by one nephew, Stephen Whitson. Ann attended Eastern Illinois University, receiving a bachelor’s degree in Education in 1976 and master’s degree in Education in 1979. While earning her degree during the day, Ann worked evenings at Consolidated Communications and later at RR Donnelley in Mattoon, IL. Ann became a teacher and coach for Mattoon Community Unit School District #2 from 1976 until her retirement in 2008. She taught Physical Education and Health at Mattoon High School, coached volleyball, assistant basketball coach, and served as a field judge for IHSA State Track & Field. With a passion for education, Ann was also an instructor at Lake Land Community College and Eastern Illinois University. Throughout her impressive career, she was awarded Who’s Who of United States Teachers in 1992, 1994, and 1996. After retirement, Ann worked at Eastern Illinois Area Special Education (EIASE) until 2016. She was a member of Mattoon Eagles Club and American Legion. In her free time there was nothing Ann enjoyed more than traveling to the ocean and relaxing in the warm weather. She loved life, teaching, friends and family. Making a lasting impact on many throughout the years, Ann’s memory will live on. Memorials in her honor may be made to Sarah Bush Lincoln Cancer Center, 1000 Health Center Drive, Mattoon, IL 61938. Please visit www.mitchell-jerdan.com or www.facebook.com/mitchelljerdanfuneralhome to light a virtual candle in her honor or share a memory with the family.

The family of Ann J. Norberg created this Life Tributes page to make it easy to share your memories.

Send flowers to the Norberg family.